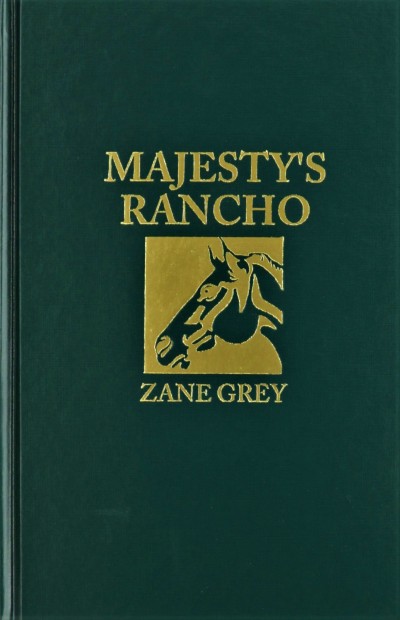 When “Majesty’s Rancho” was first published, in New York Sunday News, 26th September 1937, Zane Grey was 65 years old. It’s prequel, The Light of Western Stars, was published 24 years earlier. I mention this, because I believe it has an impact on the end result of “Majesty’s Rancho“. Later publishings were in hardcover in 1938 by Harper & Brothers, in 1942 as an Armed Services Edition and in 1949 by Zane Grey Western Books.

I had to pull back several times while reading “Majesty’s Rancho” and writing this review because I kept on being hit by a sense of “Huh?” and “Say what?”. One reason was the way Madge/Majesty was treated in the story. Grey did not like a female protagonist who might be perceived as possibly stronger than the male protagonist (Pauly, T.H., 2014). By the time he had finished with Madeline in The Light of Western Stars, Grey had found his recipe for breaking such women down and he used that recipe for what it was worth in “Majesty’s Rancho“. He was apparently not alone in not wanting that. Reviewers and the blurb all seem to agree that she needed taking down a few notches.

Nels: “Wal, I have. An’ I’m gamblin’ on her, Gene. Wild as a young filly, shore she was. But good as gold an’ as true as steel. When she was heah last I had some jars, you bet. I had to figger oot thet times had changed since you an’ me ran after girls. We’ve stayed right in one spot, Gene, an’ this old world has moved on.”

“Right. I’ll bet you we have it coming to us. Madge said in her letter she was having a crowd of college friends come to visit her.”

“Fine. She did thet last time an’ I never had such fun.”

Another thing I had a problem with was the way Madge was blamed for the current finances of the farm. However, when she left the farm, for The University of Southern California, as a 16 year-old their family was wealthy. Madge, herself, had a fond worth a million dollars and her mother was even wealthier. In addition, their ranch was doing really well. That perception was maintained by both her mother and her father the entire time she was away, meaning Madge spent money accordingly. Instead of letting her know that the Crash on Wall Street in 1929 had affected their family and that they all needed to use less money, they told her nothing. Gene had no head for money and kept making unwise money choices. He was afraid of letting Madeline (his wife) do their books in case she found out he had taken out a mortgage on the ranch. All the way through the story, Lance keeps up an internal ranting towards her spending yet he also kept his mouth shut because of a promise to Gene. Madge had sensed something was off the last time she was home but did not know what it was. Before coming home, she had decided she would be spending the rest of her time and money on the upkeep of the ranch. She just wanted one last summer with friends.

“I get it,” she said, soberly, dropping those penetrating eyes. “I’ve always understood Majesty’s Rancho was mine. You know, just in a vain and playful way, perhaps. How about that, Dad—seriously?”

“Of course this ranch is yours—or will be someday, which is just the same. And a white elephant—my daughter.”

“Not for little Madge. What do you suppose I went to college for? What did I study economics for?… Dad—Mom, I tell you I’m home for good. I’m crazy about my home. It has been swell to have unlimited money. Let me play around this summer—entertain my friends—then I’ll hop to the job.”

Madge/Majesty Stewart is the daughter of Gene Stewart and Madeline Hammond from The Light of Western Stars. She has grown up on an awesome ranch right across the border from New Mexico (Blake, K., 2014). When we first meet her she is an honor student and secretary to the student body at the University of Southern California. She is popular with her fellow students and is considered kind and sweet to others, hardworking and a little wild. Her beauty and spirit attract men to her, some nice and some not so nice (like Honey Bee Uhl). Except for Ren Starr and Nels, all the men we get to know in “Majesty’s Rancho” want to possess Madge.

Lance Sidway is the male protagonist. Much like Madge, he is beautiful, kind and sweet to others, hardworking and a little wild. He loves women and they like him. His financial background is completely different to Madge’s, and that background goes some way in explaining how completely incapable he is of understanding Madge. His mom had died early, the Crash and Great Depression came and took their ranch, he had to quit college, his dad died and Lance had to get his sister’s surgery and recovery paid for. So he and Umpqua, his horse, went to Hollywood and Umpqua made a name of itself. Lance got sick of never making a name of himself, always having to be a stunt or boyfriend to  up-and-coming actors, and having to play second fiddle to his horse. So he left Hollywood with Umpqua to find the Wild West he had heard of.

What he found was that both he and his horse got into better shape and that the West was not so wild after all.

He knew that arid country, having been to Palm Springs and Indio with motion-picture companies. Still, sight of the rolling wasteland with its knolls of mesquite and flats of greasewood, and the irregular barren mountains zigzagging the horizon, afforded him keen pleasure. How different this country from the golden pastures and black hills and swift streams of Oregon! Lance could not have conceived a greater contrast. And by noonday the June heat of the desert was intense. Sweat oozed out of his every pore and Umpqua was wet. But this heat was what both horse and rider needed. They were heavy from underwork and overeating.

Gene Stewart, Madge’s dad, is also mostly a nice guy. He longs for an exciting past he could understand and not the boring demands of being a settled man to an adult (18) daughter. He projects much of his unhappiness on to Madge and there are moments when she wonders if he really loves her. Grey was 65 when the serial was published. He bemoaned the older, slower days when nature remained unspoiled by automobiles and automatic weapons (Cast, C.C., 2008). Gene is written with this type of spirit. Gene’s wife, Madeline is a background figure who comforts Gene and Madge when needed.

When Madge and Lance meet both fall immediately in love. However, from the time they both meet again at the ranch they treat each other atrociously. If this is love, then I’m not missing anything in my life. Why would Grey write them both so jaded? It’s as though he had seen “Gone With the Wind” and wanted to write something like that. Such “romances” have never appealed to me and I wasn not able to finish either the book or watch the film of “Gone With the Wind“.

The main antagonist of “Majesty’s Rancho” is Honey Bee Uhl. Grey often makes his antagonists cartoonish and Uhl is no exception. He did not feel as dangerous as he should have even when the story got to his main scene. I wasn’t able to believe in him, and I think that was part of my problem with this story.

All in all I have to say that “Majesty’s Rancho” is far from one of Grey’s best works. As far as language, it felt authentic. There were racial slurs typical of white farmers of that time. Most of the time I felt as though I was reading the words of a bitter old man, which Grey probably wasn’t. And the romance was soooo not my style. However, if you are into stuff like “Gone With the Wind” then this might be a story for you.