“When the Santa Fe Trail first opened, in 1821, it began at a village and landing area called Franklin, on the north bank of the Missouri River in the central part of the state of Missouri. It headed west, following the Missouri upstream, across tall grass prairie, to the bend where the river turns sharply to the north. The trail continued on to the west, across the heart of Kansas and through increasingly more elevated, more arid lands. It passed through the site of Council Grove, where the tall grass prairie melted into the mixed grass prairie, and the vicinity of Dodge City, where the mixed grass prairie dissolved into the short grass prairie.” (John J. Sharp)

The Belmet family is getting ready to leave Independence, Missouri to heed the Call of the West. The family traveled with one of the large freight caravans. While waiting to leave the son of the family, Clint, meets a young girl called May Bell. It seems her family will be going along with the Belmets. The settlers are told:

“He said we’d all fight Injuns first, then kill off the buffalo, before we’d go to farmin’.” 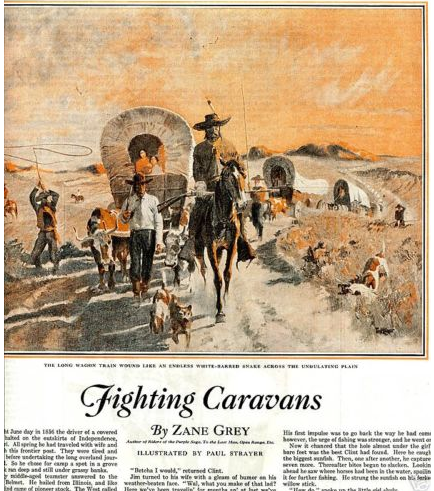 The times being what they were, women were not ladylike if they killed buffalo or “Injuns”. Their part in the whole adventure was to be a pioneer wife and have children. Change the setting a little and one would think Zane Grey was writing about the US today.

One of the first nights of the journey Mrs. Belmet is killed during a raid. The Belmet dog had stopped any more pioneers from being killed. 19 Comanches died.

Clint Belmet (12) had become great friends with May Bell (8) on the way to Council Grove. When he heard that she and her family were staying there, he felt the loss acutely. Some time later Clint’s father tells Clint that May seems to have been carried off by Indians while her parents were killed.

The story of the killing of May Bell’s family may have risen out of the story of the deaths of Mr. James M. White and his family and traveling companions. (White massacre) The massacre of May Bell’s family was indeed a brutal affair, but as we all know every story has two sides. From the point of view of the Cheyenne it was quite logical to try to keep the invaders from settling down. In his own way Zane Grey tried to acknowledge this two-sided story of the brutality of the West.

Clint’s determination to destroy all the Comanche sets in. Meeting Kit Carson only hammers his resolve further into his heart.

By the time our hero meets him, Kit Carson would have been about 50 years old. He served as leader of many a group traveling across the prairies and had many close calls with death and death’s helpers. Another real life character that we meet in this novel is a man called Lucien Bonaparte Maxwell. Along with Kit Carson, Mr. Maxwell led many a settler across the lands of the Native Americans. (Legends of America)

What follows is the story of how Clint grows in his role as a teamster, tracker, killer of men and beasts and learns to live with the death of his father, friends and acquaintances. As time passes Clint changes into what Zane Grey considered an ideal sort of man. But this man was missing something important in his life. Love. Being the romance writer that Zane Grey was, that could not be left unresolved.